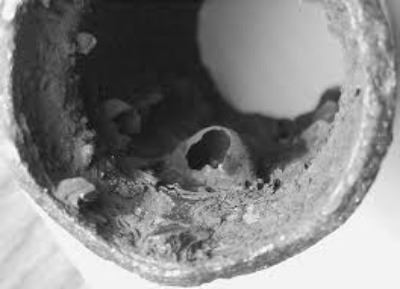 The most common biological growths in sprinkler system piping are those formed by microorganisms, including bacteria and fungi. These microbes produce colonies (also called bio-films, slimes) containing a variety of types of microbes. Colonies form on the surface of wetted pipe in both wet and dry systems. Microbes also deposit iron, manganese, and various salts onto the pipe surface, forming discrete deposits (also termed nodules, tubercles, and carbuncles). These deposits can cause obstructions to flow and dislodge, causing plugging of fire sprinkler components. Subsequent under-deposit pitting can also result in pinhole leaks.

Microbiologically influenced corrosion (MIC) is corrosion influenced by the presence and activities of microorganisms. MIC almost always occurs with other forms of corrosion (oxygen corrosion, crevice corrosion, and under-deposit corrosion). MIC starts as microbial communities (also called bio-films, slimes) growing on the interior surface of the wetted sprinkler piping components in both wet and dry systems. The microbial communities contain many types of microbes, including slime formers, acid-producing bacteria, iron-depositing bacteria, and sulfate-reducing bacteria, and are most often introduced into the sprinkler system from the water source. The microbes deposit iron, manganese, and various salts onto the pipe surface, forming discrete deposits (also termed modules, tubercles, and carbuncles). These deposits can cause obstruction to flow and dislodge, causing plugging of fire sprinkler components. MIC is most often seen as severe pitting corrosion occurring under deposits. Pitting is due to microbial activities such as acid production, oxygen consumption, and accumulation of salts. Oxygen and salts, especially chloride, can greatly increase the severity of MIC and other forms of corrosion.

In steel pipe, MIC is most often seen as deposits on the interior surface of the pipes. The deposits can be orange, red, brown, black, and white (or combinations thereof), depending on local conditions and water chemistry. The oxygenated portions of the system and often contain oxidized forms of iron and other materials on the outside, with reduced (blacker) corrosion products on the inside. Black deposits are most often in small diameter piping farther from the water source and contain reduced forms (those with less oxygen) of corrosion products. White deposits often contain carbonate scales.

MIC of copper and copper alloys occurs as discrete deposits of smaller size, which are green to blue in color. Blue slimes can also be produced in copper piping or copper components (e.g., brass heads). 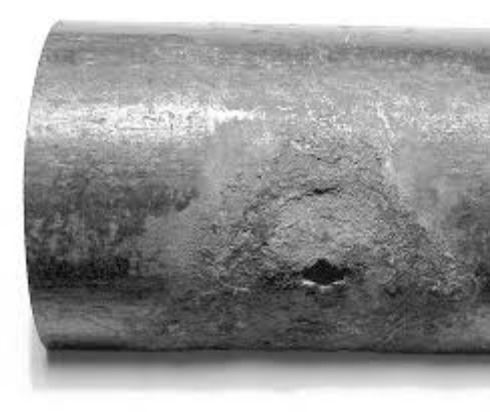 MIC is often first noticed as a result of pinhole leaks after only months to a few years of service. Initial tests for the presence of MIC should involve on-site testing for microbes and chemical species (iron, pH, oxygen) important in MIC. This information is also very important in choosing treatment methods. These tests can be done on water samples from source waters and various locations in the sprinkler system (e.g., main drain, inspector’s test valve). Confirmation of MIC can be made by examination of interior of pipes for deposits and under-deposit corrosion with pit morphology consistent with MIC (cup-like pits within pits and striations)

The occurrence and severity of MIC is enhanced by the following:

Once the presence of MIC has been confirmed, the system should be assessed to determine the extent and severity of MIC. Severely affected portions should be replaced or cleaned to remove obstructions and pipe not meeting minimal mechanical specifications.