Flood Risk Reduction for the City of Woodland

Cache Creek poses a significant flood risk to portions of the City of Woodland. The City is partnering with the US Army Corps of Engineers (USACE), the Central Valley Flood Protection Board (CVFPB) and the California Department of Water Resources (DWR) to identify projects to reduce that risk.

Ultimately, the City’s goals are to maximize state and federal investment in a project, or projects, that will:

Cache Creek, located north of the City of Woodland, carries water from Clear Lake into the Cache Creek Settling Basin (north and east of I-5) and eventually into the Yolo Bypass. The Creek has a long history of flooding. In fact, the Creek has overtopped its banks and levees more than 20 times since 1900. That’s because existing levees along Cache Creek only provide approximately a 10-year level of flood protection. This means the levees have a 10 percent chance of breaching in any given year. Most recently, the Cache Creek levees overtopped in February 2019. If not for flood fighting actions, portions of Woodland could have flooded.

Within the City of Woodland, approximately 1,000 properties are mapped into a Federal Emergency Management Agency (FEMA) Special Flood Hazard Area (SFHA) because they are within the Cache Creek floodplain. 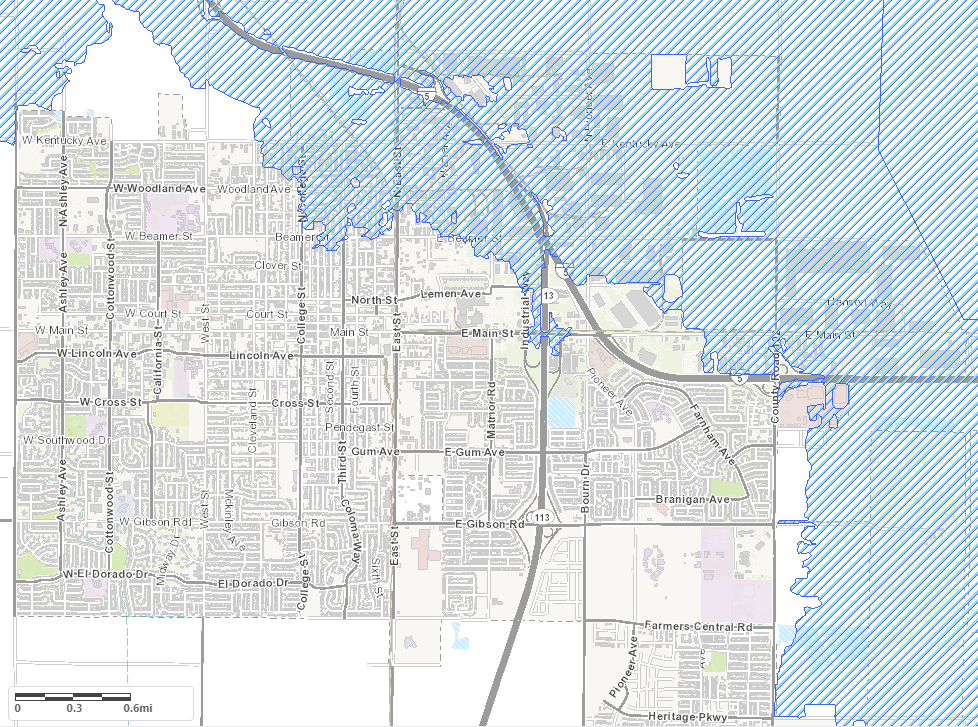 These properties are subject to building restrictions and mandatory flood insurance, which typically costs $600-$3,000 per year for a single-family residence. These properties will remain within the SFHA until a project is constructed to provide at least 100-year flood protection, which is the minimum level required by FEMA.

What’s Being Done to Reduce Risk?

Currently, there are several efforts underway to identify projects to reduce flood risk: the USACE Lower Cache Creek Feasibility Study, which will identify the USACE’s Tentatively Selected Plan (project), and the City of Woodland Flood Risk Management Project. These projects are compatible and would provide 200-year flood protection to the City of Woodland, which is a state requirement for urban areas. By pursuing both projects, the City is maximizing opportunities for state and federal funding and increasing chances that a project will be constructed. Read more about the projects below.

Concurrent with the USACE’s feasibility study process, the City has prepared the Environmental Impact Report (EIR) for the Woodland Flood Risk Management Project. The project expands upon the USACE’s Tentatively Selected Plan by adding measures to reduce flood stages and duration of flooding for agricultural properties north of the City. Actions for these properties could include raising or flood proofing structures, establishing flowage easements, and subsidizing flood insurance. The project would also comply with California’s flood protection requirements to provide a 200-year level of protection.

The City’s Draft Environmental Impact Report (DEIR) for the Woodland Flood Risk Management Project was released on March 23, kicking off the public review and comment period which closed on August 14, 2020. The public meeting held on July 28th was recorded. Here is the link to the recording:  Woodland Flood Risk Management Project Draft EIR Meeting July 28, 2020

During the public meeting, a question was asked whether the document that was prepared to analyze property values and other concerns for the lands north of the City that would remain in the floodplain could be made available. The document was prepared by Bender Rosenthal and the link to the document is here:

The City, CVFPB, DWR, and the USACE are coordinating on a feasibility study to identify a locally-supported plan to increase flood protection to the City and adjacent critical infrastructure, like Interstate 5. The feasibility study started in late 2013 but was put on hold in January 2015 at the request of the City and state. At the time, the USACE had narrowed its study to two flood protection alternatives. Both alternatives; however, had issues that needed more study before determining if they could be supported at the local and state level.

During the pause in study activities, DWR awarded an Urban Flood Risk Reduction grant to the City. The grant paid for a UC Davis study on sediment transport, along with an engineering analysis that evaluated areas north of the City. The additional analyses were completed in 2016, but the feasibility study did not get restarted until late in 2018.

The study is slated for completion in summer 2021. The USACE will use study results to determine whether or not there is a Federal interest in a constructing a project. If there is, the USACE will issue a Chief’s Report, recommending to Congress that the project be authorized, and making the project eligible for federal funding. It can also help in identifying and securing additional state funding. 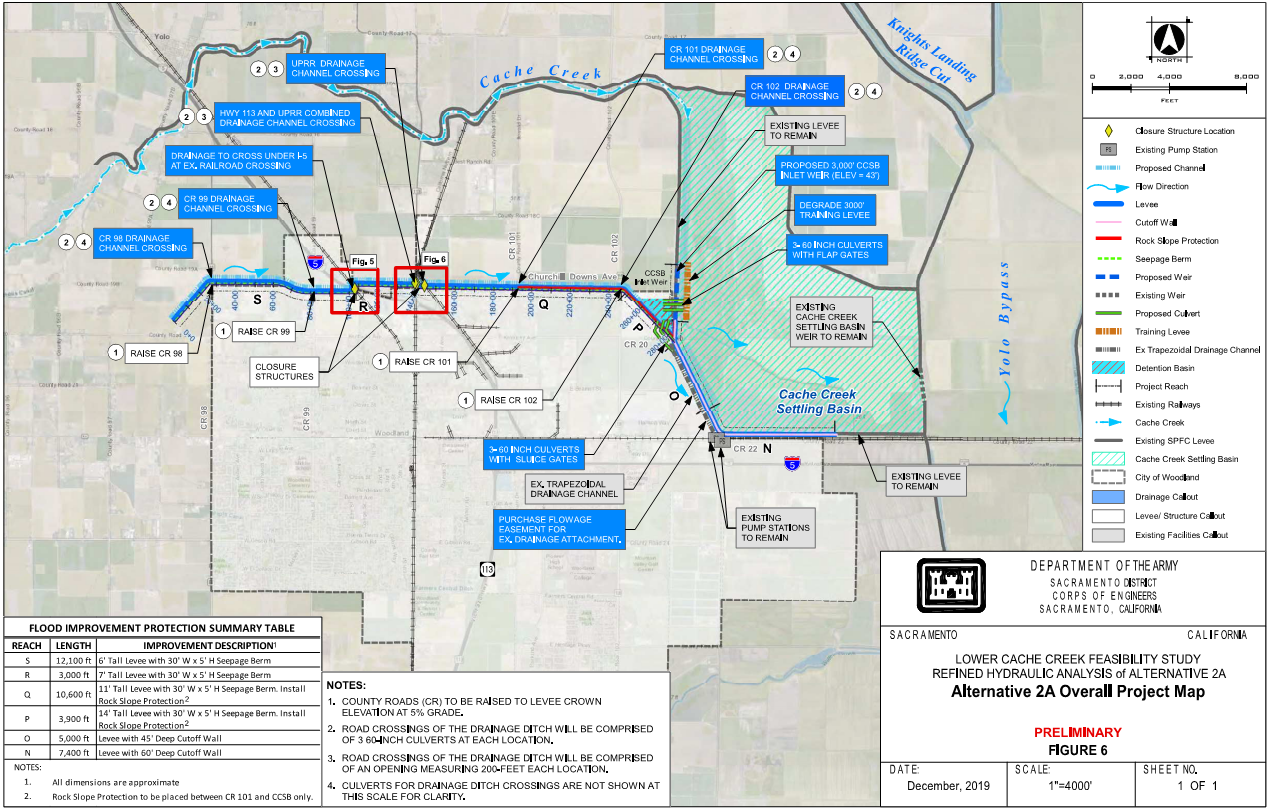 In late December 2019, the USACE released its Lower Cache Creek Draft Feasibility Report and the related Draft Supplemental Environmental Impact Statement for public review and comment. On January 22, 2020, the Corps held a community meeting to present information on the report and its Tentatively Selected Plan, called Alternative 2A – Levee and Conveyance Plan. Alternative 2A involves improving existing levees and constructing a new levee and conveyance channel north of the City to prevent flooding from Cache Creek. Proposed project features include levee embankments, seepage berms, a drainage channel, cutoff walls, a weir, and closure structures across certain roads and railways.

The public comment period for the USACE Lower Cache Creek Draft Feasibility Study closed on February 10, 2020. Study documents can be reviewed and downloaded from the USACE website: