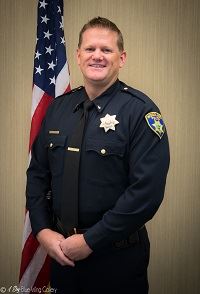 Lieutenant Heath Parsons, Investigations Bureau Commander, began his law enforcement career with the Albuquerque Police Department from 1999 to 2002. After relocating to California with his family, he attended and completed a P.O.S.T. requalification Basic Course at the Yuba College Police Academy in Marysville and was then hired by the Woodland Police Department in April 2003.

In January 2005, he was chosen to be the DUI Enforcement Officer for the department as designated by grant funding from the Office of Traffic Safety. He was a member of the department's SWAT team for many years and in charge of the bike patrol team.

Heath was promoted to Sergeant in September 2006 and was assigned as the Sergeant in command of the Yolo County Gang Task Force in January 2011.