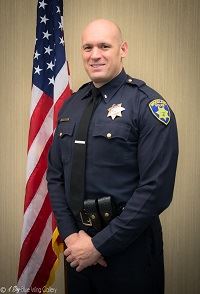 Lieutenant Aaron Delao, Patrol Bureau Commander, joined the Woodland Police Department in 1998 as a patrol officer. He worked as a patrol officer until 2003 when he joined the Woodland Police Department Gang Violence Suppression Unit (GVSU). Lieutenant Delao worked as a detective for the GVSU until 2008. In July of 2010 he was appointed to the position of Corporal and in August he was promoted to the rank of Sergeant.

In 2015, Lieutenant Delao served as the Sergeant in command of the Yolo County Gang Task Force until his promotion to the rank of Lieutenant in 2016. Lieutenant Delao was a member of the department's SWAT team for 10 years.

He has also served as a Field Training Officer and use of force instructor. Lieutenant Delao is currently assigned to the Patrol Division.