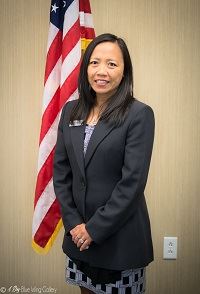 Mrs. Elle Murphy, Support Services Manager, joined the Woodland Police Department as the management analyst responsible for the department budget including grants and supervision of I.T. staff and projects. During the recession, Elle was assigned management of the facility and training arrangements for all staff. Elle served as the interim manager for the Recreation Department under the Police Chief for fiscal year 2010 to 2011.

For the next 7 fiscal years, Elle then served as the management analyst for the Fire Department under the Public Safety Chief and supervised the Fire Administrative Clerk. In December 2013 Elle advanced to the Senior Management Analyst title. In 2015, Elle was given responsibility over the Records Division, Crime Prevention, Volunteers in Policing, and the burglar alarm permit program.

Elle graduated from the University of California, Davis with a Bachelor of Arts and Sciences degree in Comparative Literature and Biological Sciences in 1994.