Sewers have been used to remove wastewater as far back as ancient Rome, and by the late 19th century, people began to make the connection between raw sewage and its effect on public health and the environment. In the early 20th century, large cities (London, Chicago) began to treat wastewater in order to reduce the amount of pollutants discharged to the environment. 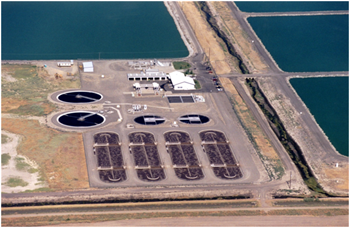 The City of Woodland has had a municipal wastewater treatment system in place for over 60 years (Treatment Ponds at Beamer and Road 102, 1950; North Ponds in the 1970s). The Water Pollution Control Facility (WPCF), originally built in 1988, was expanded in 1997 and again in 1999 in response to population growth. In 2007, the plant was upgraded to its present configuration when a major expansion, driven by new regulatory requirements, was completed.

Homes and businesses in Woodland are connected to a sanitary sewer system which conveys wastewater to the WPCF (sanitary sewer systems, like Woodland's, carry only domestic and industrial wastewater, while combined sewer systems, for instance those in the older parts of Sacramento, also carry stormwater runoff). The wastewater flows mostly by gravity, but gets a little help from pumps, until it reaches the plant where it is treated and then returned to the environment. In our case, treated wastewater is discharged to Tule Canal in the Yolo Bypass (about 5 miles east of here).