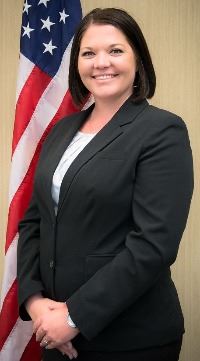 Mrs. Trista Kennedy, Executive Assistant to the Chief of Police, originally joined the Woodland Police Department in 2006 as a patrol officer. She worked on patrol from 2006 until 2012. She was a Field Training Officer from 2008 until 2012. Trista resigned from her position in 2012 to stay home with her children. She returned in late 2014 as a Volunteer in Policing (ViP). In 2015, Trista was contracted as the department’s Social Media Coordinator and assisted in launching their Nextdoor.com account. In December 2015, Trista was hired as the Volunteer Coordinator and was responsible for overseeing and working with 50+ volunteers. In February 2017, she was promoted to the Executive Assistant to the Chief of Police. Trista is also currently the Supervisor of the Volunteers in Policing Program.

Trista has helped to create several programs for the City of Woodland to include: